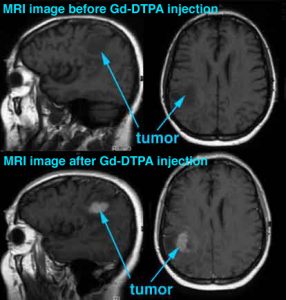 Gadolinium Neutron Capture Therapy (GdNCT) is a non-invasive experimental therapy for malignant gliomas (brain tumors) never tested on human or animal cases. It is based on a binary approach. In the first step, the patient is intravenously injected with a tumor-seeking compound containing the 157Gd isotope, which has a capture cross section for thermal neutrons many times greater than other elements present in tissue. In the second step, the patient’s skull is exposed to thermal neutrons, which induce a localized, biologically destructive nuclear reaction where Gd is localized.
Gadolinium-157 (157Gd) appears to be a good potential neutron capture agent for several reasons:

The gadolinium neutron capture reaction:
157Gd + n = 158Gd* =>158Gd + gamma + x-rays + IC e- + ACK e-
where Gd* is an excited Gd isotope, IC e- are Internal Conversion electrons, and ACK e- are Auger and Coster-Kronig electrons. All the byproducts of this reaction have low linear energy transfer (LET) and induce modest radio-biological damage, with the exception of the high-LET ACK electrons that induce double strand DNA cleavage. These are also the most abundant byproducts (5 ACK electrons per neutron capture). The radiation length of ACK electron is on the order of a few nanometers, therefore their damage is localized. Therefore cancer cell killing by ACK electrons is most effective if they originate from a site within the cell nucleus, i.e. if Gd accumulates intranuclearly.