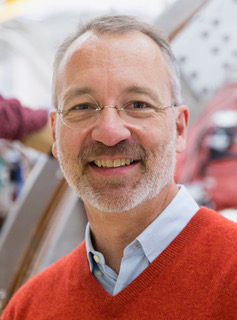 Prof. Cary B Forestreceived a Bachelor of Science degree from the University of Wisconsin in 1986 in the Applied Math, Engineering and Physics program.   He received a Magnetic Fusion Energy Science Fellowship from the DoE to attend graduate school at Princeton University where he received a Ph.D. in 1992 in the  Astrophysical Sciences department. His thesis, supervised by Dr. Masayuki Ono at the Princeton Plasma Physics Laboratory, received the   Simon Ramo Award for Outstanding Doctoral Thesis Research in Plasma Physics from the APS. In the course of his thesis work he invented and demonstrated a non-inductive method of tokamak formation based upon the bootstrap current and helped start the US spherical tokamak program. After graduate school he spent 5 years working at General Atomics as a Scientist where his work focused on advanced tokamaks and included studies of plasma resistivity, non-inductive current drive, rf heating of plasmas and MHD instabilities in tokamak plasmas (at the time GA operated the largest US tokamak research program).  The analysis technique Forest developed during this time for measuring the non-inductive currents driven in tokamaks has since been implemented in most of the world’s large tokamaks and played a central role in validating the heating and current drive models being used to predict their behavior on Iter. At the UW, Forest has received the Romnes Fellowship, the Vilas Associate Award, the Kellett Mid Career Award and most recently a WARF Named Professorship.  Nationally, he is the recipient of the Alfred P. Sloan Fellowship, the David and Lucille Packard Foundation Fellowship, and a Research Award from the Alexander von Humboldt Foundation (hosted by the Max Planck Institute for Plasma Physics in Garching, Germany (2005)), and is a Fellow of Merton College, Oxford. He has served as Director of the NSF Physics Frontier Center for Magnetic Self-Organization and currently serves as the Director of the Wisconsin Plasma Physics Laboratory and overseas its operations as a DoE collaborative user facility.  He has served and numerous study committees of the National Academies of Science and has Chaired program advisory committees at MIT and Princeton. He is a Fellow of the American Physical Society and has Chaired the the Division of Plasma Physics and also served a an APS Counselor.

Forest’s research program in experimental plasma physics is on the border between nuclear fusion research and laboratory plasma astrophysics. This includes research on liquid metal dynamos and MHD turbulence; research on MHD instabilities in line- tied plasmas and their stabilization by moving metal walls; studies of heat, current transport, and non-inductive currents in spherical tokamaks, advanced tokamaks and RFPs, and developed a astrophysically oriented experimental platform to study flow-dominated, rather than magnetically dominated plasmas. During his time at Wisconsin, Forest’s group has brought into operation four (and soon five) new major experiments, including the Madison Dynamo Experiment (sodium), the Rotating Wall Machine, the Plasma Couette Experiment, and the Big Red Plasma Ball in the Wisconsin Plasma Physics Laboratory. Most recently, Forest has reinitiated magnetic mirror research in the United States and is constructing the Wisconsin High Temperature Superconductor Axisymmetric Mirror (WHAM) device as a prototypical fusion based prototypical neutron source for both academic and industrial applications. Three of Forests students have received the Rosenbluth Thesis Award for top thesis from the APS.